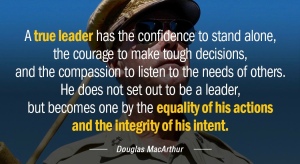 You can find lots of articles on leadership that talk about the characteristics required to lead. I’ve written several myself. The two I most often write about are integrity and judgment. Asking which one is more important is a lot like asking which came first the chicken or the egg.

Leading is hard. It’s hard because leadership is about people. You can manage stuff but people must be led. People, all people, are emotional. They have hopes, dreams, challenges, and worries.

If you’re leading them, truly leading, you’re dealing with your emotions, your dreams, your challenges, and your worries, PLUS theirs. That is not easy.

One of the most serious failings I see from people in leadership positions is lacking the courage to deal with conflicts or even potential conflicts. They will go to great lengths to ignore the situation. They will tell themselves that time will “fix” the problem. They will tell themselves and sometimes other people that “they aren’t baby sitters” and people just have to work these things out on their own. That’s NOT leading.

Making decisions is another area that often requires courageous leadership. When a person in a leadership decision lacks courage they often simply don’t make the decisions required of a leader. What they fail to realize is that not making a decision IS a decision and it’s very often a wrong decision.

Sometimes people in leadership positions lack the courage to say no. When asked for something they know isn’t possible they answer with a “we’ll see” or a “let me think about it.” They know that “no” will be an unpopular answer and they lack the courage to make unpopular decisions. That’s NOT leading either.

Some days leading requires a huge amount of courage. Some days not so much. But courage is a constant in all Authentic Leaders. Possessing the courage to lead is a leadership characteristic not considered often enough. But I’d put it in my top three most important characteristics for a leader.

What about you…do you believe a leader should possess courage?

18 thoughts on “The Courage to Lead”