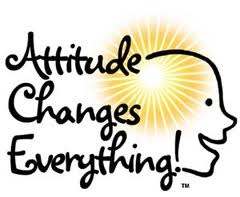 So let me ask you this question – what are some things that can have an effect on your attitude before you even get to work in the morning? Think about that for a moment. Now STOP. STOP right there!

Do you realize that you’ve just been given a choice? It’s a choice you’re given every single day, and I’ll bet you didn’t even realize it was a choice. Now since most people reading this post have a positive attitude, what are the things you thought of when given that choice? Are you surprised by what you thought of? Notice I didn’t say what can have a negative effect on your attitude I just said what can have an effect on your attitude, you had a choice. What did you choose positive or negative? I know from experience that the vast majority of “positive” people thought of something negative.

That’s a choice you have the opportunity to make constantly throughout the day. It’s amazing how many people surrender that choice to other people or other things… the kind of things many of you just thought of when given a choice.

Some leaders say they care and some leaders show it. It’s the easiest thing in the world to say that we care but some immature leaders are just too afraid to show it. Even though we may really mean it challenges can still appear when the people we lead hear it but don’t see it.

1) Truly listen! Give your time and undivided attention to your people, demonstrate you care by showing active listening. Take notes if you must, repeat back what you’ve heard and leave no doubt that you heard what was said and that what was said matters to you because the person that said it matters to you.

2) Invest time with your people. Some leaders spend time on their people while authentic leaders are investing time with their people. It’s simply not possible to build another leader without investing your time, energy, and resources into that person. You can perhaps build a follower by spending time on them but an authentic leader focuses on building more leaders. Building more leaders requires that you invest your time. Schedule time with your people, never try to invest free time or spare time because odds are you’re never going to have that type of time. Your investment must strategic, intentional, and consistent. Carve out some time each day, even five minutes a day is better than nothing but everyday is a must if you goal is to truly help others on your team grow into a leader.

3) Provide caring feedback. If you’re a leader I’ll guarantee your people want to know what your thoughts are about them. Give them honest, open feedback. Perhaps some coaching on an area of improvement and some positive reinforcement on something they do well. This feedback should be consistent, it should be on a regular basis and understand once you start the feedback cycle you can’t stop. Once started when stopped it causes all kinds of doubts and concerns and hesitations on the part of your people. If you stop talking they believe something could be wrong so commit to continuous feedback, continuous conversations with your people about their progress, your vision and your hopes for them. Let them know that great things are possible for them and that you’re there to help them achieve those great things.

You may not have to really care about your people to call yourself a leader but you do really need to care before your people will call you one. So go ahead, show you care, I dare you!

I once heard a top executive at a major corporation say “my job is to keep people guessing. If they know what I’m thinking or what I want them to do, then I’m not doing my job.”

This guy was a VP at 3 companies that are well known and respected around the world by the age of 40; he is now the President of one of the world’s leading manufacturing companies so you might say it’s hard to argue with his results. But in my humble (ok, so maybe it’s not so humble) opinion his methods were awful. Awful enough that he can’t seem to sustain himself at a company for more than a handful of years.

I had the opportunity to watch him up close when we worked together several years ago. His methods burned bridges it didn’t build them, his methods not only didn’t build relationships, it stymied them. He deliberately kept his people at arms length and worst of all, he made a deliberate decision to NOT communicate with them.

When someone in a leadership position fails to communicate many negative things begin to happen, morale slides almost immediately, followed quickly by productivity.

I have a theory as to why that happens; I think people have this “information space” inside of them and that space needs to be constantly filled. If it’s not filled with accurate information from say a leader for instance, then they will find a way to fill it themselves. What they normally fill it with are what we call rumors. Rumors are interesting things, they don’t have to be true, they don’t have to be positive, in fact, all they have to do is fill up that space.

One of the many problems with rumors is that they don’t fill us for long so we always tend to be on the lookout for a new rumor to fill the space. It’s all this searching for a new rumor that tends to kill productivity and it’s the content of the rumors that tend to kill morale. (did you ever notice that most rumors are about bad stuff?)

An authentic leader knows that information is the enemy of rumor. They consistently share every bit of information, company news and financial results that they legally are allowed to share. Authentic leaders communicate well because they know that their people also have a profound interest in the well being and direction of the company, just like they do.

Authentic leaders are intentional in their communications, not trying to communicate in their free time (as if there is such a thing) but scheduling time to make certain that communications are clear, accurate, concise and most of all, consistent.

People seldom follow blindly, so if you hope to lead you’re going to have to tell them where you’re leading them. You’ll have to tell them the what, why, where, and how of your leadership. It really comes down to this: if you can communicate well with your people they may follow, if you can’t or won’t communicate then they might be behind you but they are almost certainly not following.

I can’t finish this post without also pointing out that truly effective communication is a two-way street, so while you’re communicating be sure to pause often enough to ensure what you’ve said has been heard and understood. An authentic leader will never mistake silence for agreement. Encourage open and honest feedback from your people, they will help you to grow as a leader if you’ll let them.

I am also quite certain that one of the biggest challenges facing business today is people placed in a leadership position that have no ability to lead. It happens all the time, the best salesperson, the best marketing manager, the best accountant, are taken out of their position and made the “boss.” Simply because they were the best at what they did doesn’t mean they’re going to be the best at what you’re about to ask them to do, it doesn’t even mean they’re going to be good at it.

If you’ve earned your way into a leadership position, don’t assume you’re a leader because of it. Find yourself a mentor, a coach, a confidant, someone with the courage to tell you the truth, to tell you what must change in order for you to become an authentic leader. Someone that can help you grow into the leader your people and your company need.

As you grow in your leadership role you’ll see your people grow along with you. That’s the true measure of effective leadership, helping other people grow. Leaders build other leaders, leaders help people be all they can be. So…. will you Lead Today?

So… My first blog post! I’ve delayed starting a blog because I just don’t have time for this. I tweet a lot as @leadtoday and I invest a fair amount of time there. But time or not I decided to start this blog because sometimes, okay often, 140 characters just doesn’t get it done.

I’ll be blogging about the same things I tweet on, leadership, sales, motivation and just building a better you. I’ll try to respond and reply as often as I can but sometimes I may seem a little slow. I don’t know how often I post but I’ll try for a least one “major” post a week.

We’ll be starting soon and I’m already looking forward to your comments!