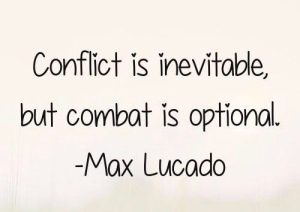 Most people would tell you that conflict resolution skills are essential for all leaders. I absolutely agree with that. Authentic Leaders meet conflicts head on. They don’t avoid them, they work through them to build consensus in a way that is people valuing and face-saving.

For those Authentic Leaders conflict resolution skills are vital.

For those leaders few things are less important than conflict resolution skills. That’s because they avoid conflicts like the plague.

What those leaders won’t tell you is that one big reason they refuse to engage in a conflict is because they lack the courage and the compassion to do so. Another reason is that they believe that have only two choices when it comes to conflict. Those choices are fight or flight.

Nearly 100% of the time they choose flight. The see any conflict as a potential fight and they want none of it. What these weaker leaders need to understand is that an Authentic Leader does not allow a conflict to become a fight. So they have no need for flight.

The reality is that no one actually avoids conflicts, but some people do attempt to live with them. But left unsettled conflict is an untreated cancer on both organizations and relationships.

If you’re serious about resolving conflicts you will listen far more than you talk. If your responses include any variation “yes but” it may indicate that you’re being defensive. We don’t listen very well when our defenses are up. So check yourself to be certain you’re willing to have your opinion changed. Authentic Leaders know that they can be wrong about pretty much anything, just like everyone else.

To effectively resolve any conflict leave your “blame game” at home. The original cause of a conflict is less important than the lasting resolution. When you place blame on people you cause them to disengage. All parties to a conflict MUST be part of the solution. Before you engage in conflict resolution ask yourself what your goal is… do you want to place blame or do you want to resolve the conflict.

It goes without saying that only one of those goals is productive. Authentic Leaders know which one.

Authentic Leaders are willing to compromise to find lasting solutions to conflicts. They demonstrate that while they may be passionate about their own point of view they value workable resolutions over “winning.” They in fact understand that “winning” requires all sides be able to resolve the conflict with their self-respect intact.

Authentic Leaders with excellent conflict resolution skills do not forget the importance of relationships. They realize that how they make the other people feel is just as important as the eventual resolution. That “feeling” will likely outlast the resolution. It will also impact, either positively and negatively, any attempts to resolve future conflicts.

No matter how fast and far you run you should know that the conflict you’re running from will be waiting for you when you get there. So don’t run. The sooner you deal with the conflict the sooner you can return to building healthy and productive relationships with your people.

That makes the effort required to successfully resolve conflicts well worth it.

One thought on “The Importance of Conflict Resolution Skills”