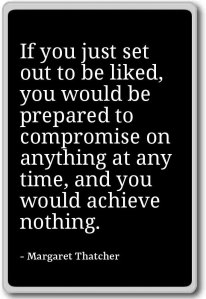 There are few things in life I’m more sure of than this…not everyone likes me. I think I’ve always been fine with that fact. If there was a time it bothered me it was so long ago that I can’t remember.

I’d would much rather be unliked by some and happy than be liked by everyone and miserable because I can’t just be me. I suppose somewhere in the world there might be somebody who is universally liked and happy too but I’ve not yet met them. And I’ve met a whole lotta people.

I want to urge you to resist the temptation of thinking it’s bad when someone doesn’t like you. I strongly urge you to ignore that little voice in your head telling you that it’s your fault they don’t like you.

You should pay attention to the advice you receive from the people who love you. They may not, in fact they will not, always say the nicest things to you. But if they love you they will have your best interests in mind, so consider everything they say to you, whether you want to hear it or not.

When it comes to the people who like you I’d advise being very cautious about listening too closely to what they say. You may disagree agree with this but “friends” don’t always have your best interests in mind. Unlike the people who love you, their motives may be questionable. I don’t mean to disparage anyone’s friends, I’m only saying to be aware.

But what about the people who don’t like you? Well this may surprise you but you can learn a lot from those people. Their “advice” is often not meant to be advice. It may be delivered in a hostile manner or even through a third party behind your back.

But you would be wise to give it serious consideration because if one person sees a possible flaw in you others may see it too. Maybe not but maybe. The most successful people are willing to consider even the harshest criticism as an opportunity to learn and grow. People who don’t like you may in fact be more honest with you than the people who do like you.

Their intention may be to hurt you but that’s their problem. You still have the potential to strengthen and improve yourself with the very words that were intended to do you harm.

Or, you may determine, as I often do, that their words carry no merit and you can dismiss them. But DO NOT dismiss them without a pretty healthy dose of HONEST self-reflection. You will be better for it.

There’s enough people in the world who don’t like me that if I failed to learn from them I might not learn very much at all. It might be the same for you…just a little something to consider.