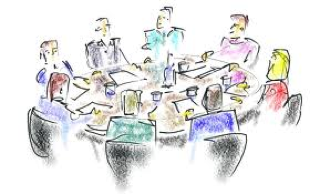 A few weeks ago a meeting invite popped up on my outlook calendar. Despite the long meeting description I had no idea what the meeting was about or why I was invited.

I went in search of the meeting organizer to get more information. I asked about the objective of the meeting and was told that the meeting was so important “there was no time to mess with objectives.” I was almost honored for a moment since I had never before been invited to such an important meeting.

The moment was short lived because when I pressed this person for an objective it became clear he truly didn’t have one. He just knew it was important and that “something had to be done.”

I applaud people with a strong bias for action. What they often fail to understand is that bias for action does not equate to bias for purpose. They lose sight of the important because urgent is staring them in the face.

The person who sent me the meeting invite was attempting to organize an unproductive meeting.

He was also not the first person to make that mistake.

According to Get a Klu, a consulting firm that provides corporate coaching and training, professionals lose 31 hours per month to unproductive meetings. That’s four work days each month.

That’s not all. Wolf Management Consultants asserts that 73 percent of professionals admit to doing unrelated work in meetings and 39 percent even dozed off in meetings.

According to the U.S. Bureau of Labor Statistics, the average corporate manager spends at LEAST 25% of their time in meetings. 50% or MORE of these meetings are considered to be a waste or completely unnecessary.

How big a deal is that? Well consider this; even small businesses paying their employees $14-$25 per hour are estimated to lose over $600,000 a year to unproductive meetings. Large businesses lose millions, literally millions of dollars of productivity. Every year!

If you find that hard to believe then invest 99¢ and try MeetingCalc, an iPhone app that lets you specify how many people are in the room and what the average hourly rate is of the attendees. Be warned, the numbers will absolutely horrify you.

I’m fortunate to attend productive meetings, sometimes. I attend a monthly sales meeting that always has an agenda, we know going in exactly what’s happening. The objective is reviewed to begin the meeting. The agenda is followed, information is shared, tasks are sometimes assigned and at the end of it, you feel as if you needed to be there and that something was accomplished

I also attend a periodic meeting to plan for a large trade show, the person who organizes it knows what she’s doing. Once again, there is always an agenda that gets followed. She keeps the meeting on track and after it’s completed progress has been made.

Well managed meetings begin with a process, great thought is given to who should attend and why they need to be there. Whole departments are never invited when one or two people would do.

The best meetings have a clearly stated objective, it is specific and measurable. This most basic of successful meeting requirements is also the most frequently forgotten.

Productive meetings have a pre-set follow up scheduled. People are accountable to the follow up and any associated due dates. Most failed meetings skip the meeting follow up, except to schedule another meeting.

No meeting agenda or objectives lead to disengaged participants; people whose minds wander and who spend the bulk of the meeting messing with their phone or tablet. With any luck they ARE doing something productive, it just has nothing to do with the meeting they are in.

But here’s the worst part, nobody seems to care. Companies that don’t require meeting objectives and agendas guarantee lost productivity. People who schedule meetings with little consideration regarding who NEEDS to be there and who refuse to prepare an agenda steal time from the other meeting participants.

Successful, productive meetings are not rocket science. They are the result of thoughtful planning, due consideration of the investment, both the time and money investment and effective follow up to the objectives were met.

There is no question that anyone can run a productive meeting. The question is why don’t they?

I think it’s a case of laziness. What do you think?

15 thoughts on “How to Avoid Unproductive Meetings”