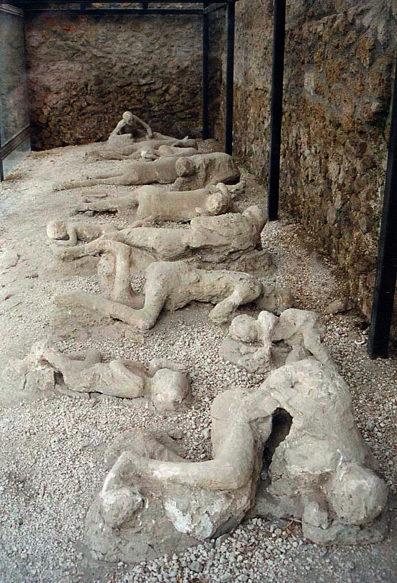 I visited the ancient city of Pompeii last week. This is the city near Naples, Italy that was swallowed up by a volcanic eruption in the year 79 AD. It was buried in ash for over a 1000 years and rediscovered in 1599 when excavation was begun on a costal highway.

It was an amazing, surprising, incredible, and shocking place. I was amazed by the sheer size of it. To say it was sprawling would be an understatement. Some of the dwellings were huge, even by today’s standards. There was clearly a class system in place and some were obviously better off than others. I was surprised by how advanced it must have been for the time. There were many shops and storefronts, there must have been a pretty advanced system of commerce. Speaking of commerce there were somewhere around 20-25 brothels in Pompeii to service the visiting sailors who arrived in their port.

The layout and engineering of the city was incredible. Their ability to collect and direct water was very advanced and we even saw what was described as the first retail bakery shops. I don’t know how they can be certain they were the “first” but no other civilization is coming forward to dispute the claim so I guess they have it.

Most of all I was shocked by how suddenly it all ended for them. They figure the people of Pompeii were gassed by the volcano and then buried by the ash. That’s why the bodies, buildings, and roads are so well preserved. It’s that preservation that shows so much detail about how the people lived their everyday lives.

It looks like they had pretty darn good lives. They lived very much as we do today, it appears they had jobs, hobbies, family, and friends. They enjoyed a good meal and time to relax. They worked hard and it showed in what they were able to build. They prospered right up until the time they didn’t.

Here we are thousands of years later, I’ll bet many of us have plans for tomorrow. Some little things we want to do. Some big big plans to begin that we know will change our lives. Some of us perhaps have some relationship fences to mend or we owe someone a long delayed apology. Tomorrow will be the day we make it right.

But what if tomorrow doesn’t happen?

The people of Pompeii were literally frozen in place. They died and their plans died with them. Many of us are metaphorically frozen in place, frozen in today, always waiting until tomorrow to tackle that tough task or unpleasant, challenging conversation.

But what if tomorrow didn’t happen?

What are you putting off until tomorrow that you could just as easily do today? Take a moment right now to ask yourself why you’re not starting today. Be honest with yourself and be especially honest about whether you have a legitimate reason or just a procrastination inducing excuse.

Whatever you can do today, do today. We may not all lose tomorrow the way the people of Pompeii did but for each of us there is a day when tomorrow will not happen. Perhaps we’re better off living as if that day might possibly be the day we’re living now.

11 thoughts on “Tomorrow in Pompeii”