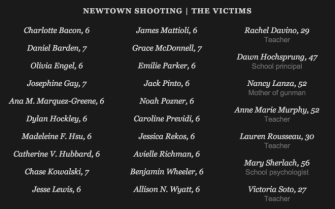 I arrived at my hotel around 3:15pm on Tuesday, December 11th. I had just made it to my room when I heard the sirens. I looked out my 10th floor window and saw a line of police cars going past, it was a long line. Lots of police cars and then, then came the ambulances. I was in Portland, Oregon and a nearby mall, full of Christmas shoppers had just been shot up.

The local news in Portland last week was centered around the mall shooting as you can imagine it would be. Many stories on the victims and the shooter. It was a strange feeling being so close to that.

At 5:30am PST on Friday we drove past the Macy’s that I has seen on the news so often that week. I couldn’t help but wonder where and when the next horrific shooting would take place.

I didn’t have to wait long for an answer.

As I boarded my flight to Minneapolis news reports began to pop up on my phone about a shooting at a school somewhere in Connecticut. I stayed up to date on the events in Newtown through the WiFi on the plane and as we were landing in Minneapolis the absolute horror of what had happened was just coming into focus.

27 dead at an elementary school, most of them kids. I can only imagine how terrible it must have been in that school. We are still learning the details but this much is clear, there is a sizable portion of the U.S. and world populations who will use this crime for their own political purposes.

I tweeted on Friday evening that this shooting was worse than others because the victims were so young, so innocent, with so much before them. Almost immediately some ignorant person from Brisbane responded that the U.S. deserves it because the U.S. slaughters 1000’s of kids a day. Another from the middle east thought is was funny that Americans only care about American kids. Yet another was “disappointed” that more “future murderers” weren’t killed.

I blocked them all immediately but my disgust couldn’t be blocked. I was furious with those responses and saddened that some in the world could actually have that kind of view of my country.

I heard that Governor Mike Huckabee, a host on Fox News, said that we shouldn’t be surprised by “these types of things” since we (the U.S.) have been working to systematically remove God from schools.

I know exactly what Governor Huckabee meant by that and I’m sure there was great emotion behind what he said. But the quote as I heard it made it sound as if God had turned his back on the kids and teachers at the school. Nothing could be further from the truth.

We will never “legislate” God from our schools or anywhere else. God goes where He wants and God does what He wants. Now, having said that I’m sure what happened in Newtown was not God’s doing. He didn’t want it but the free will He gives us allowed evil into Newtown. He grieves with the parents of the children killed and the families of the adults who died trying to protect them.

I can’t imagine how this horrible crime fits into God’s plan but I know it does. I have no idea why He would allow it to happen but trust that He will make it clear to us one day.

But make no mistake about this; God did not abandon those kids, He was there and He is there.

I know all too well the horror of losing a close family member to gun violence. I will never ever forget the moment I heard that my big brother was dead, killed by four shotgun blasts from close range. It’s a feeling that’s simply impossible to explain and it’s a feeling that never totally leaves you.

We can’t fix it for them, we can’t ever make it better and it’s very likely we will never be able to explain it to them either. Just because we can’t make it better doesn’t mean we should make it worse.

So no fighting, no politics, no blaming.

We can be there in spirit and in prayer. Be there!

12 thoughts on “The Horror of Newtown”